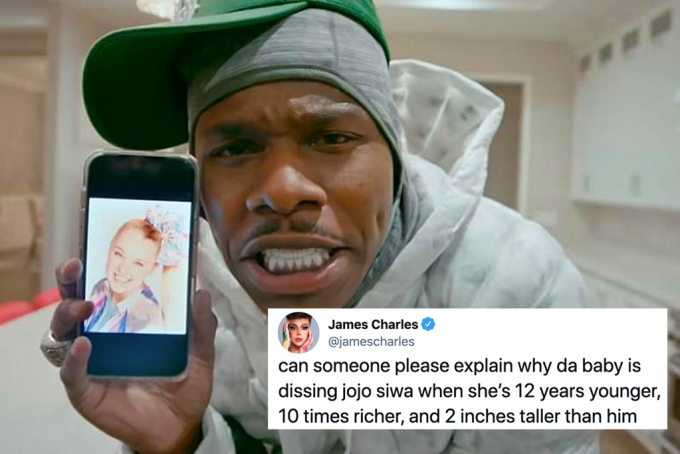 DaBaby Came For JoJo Siwa In A Song, So Now Everyone’s Dragging DaBaby

Over the weekend, DaBaby released his latest track, ‘Beatbox ‘Freestyle”, and while the song isn’t really worth writing about on its own, the rapper’s decision to come for JoJo Siwa on the track, is.

The two-minute remix of viral TikTok song ‘Beat Box’ by SpotEmGottem isn’t anything special. DaBaby doesn’t rap about notable, but about a minute into the remix he decides to take a very strange shot at JoJo Siwa, calling her a bitch while holding up an image of the teen superstar.

“You a bitch, JoJo Siwa (Bitch!),” DaBaby raps in a line that has truly baffled the internet. Since the song’s release, everyone has been trying to make sense of why a 29-year-old man is coming for a 17-year-old.

For context, DaBaby is a 29-year-old rapper, who has had a couple of notable features over the last few years including on Megan Thee Stallion’s ‘Cry Baby’ and Dua Lipa’s ‘Levitating’. When it comes to his own projects, DaBaby has had a few smash hits in ‘Rockstar’ and ‘BOP’. But a lot of his latest releases haven’t really broken through, which may explain his recent decision to come for Siwa.

JoJo Siwa on the other hand, is a 17-year-old social media sensation, who has made a successful career for herself as a children’s entertainer via YouTube. Siwa recently made headlines by confirming that she was part of the LGBTIQ community after sharing a bunch of cryptic clues online. From this, JoJo Siwa has gained a whole lot more fans, who have praised her for her decision to come out at the peak of her career.

Putting two and two together, one can only assume that JoJo Siwa getting so much press coverage inspired DaBaby to name drop the YouTuber in his new song, perhaps with the hopes of getting more views.

In defence of the rappers lyrics, one Genius lyric annotator suggested that “Siwa” is simply used as a homophone for “see why”. Similarly, DaBaby fans on Twitter explained that the rapper’s real name is Jonathan with JoJo being a nickname, so the line reads more like “You’re a bitch, and Jonathan sees why”.

Responding to criticism about the line, DaBaby tweeted “I ‘Siwa’ I’m not like the rest of you…” this morning, implying that his use of JoJo Siwa’s name was in place of the word “see why”. But it still begs the question of why a 29-year-old man thought coming for a literal child and showing her photo was a normal thing to do, regardless of the word play involved?

Some speculated that DaBaby might be jealous of two-inch height difference JoJo Siwa has over the rapper, while others suggested it may be the fact that the teen is estimated to be worth $11 million more than him. Or maybe it all boils down to the 17-year-old managing to find way more success in the industry despite being 12 years the rapper’s junior. Hell, DaBaby might even just be fed up with his young daughter listening to JoJo Siwa’s music on her iPad when he’s around.

Whatever the reason, the memes that have come out of the most unlikely beef of 2021 have been hilarious to witness. So here are all the best memes about the beautifully baffling DaBaby and JoJo Siwa drama:

DaBaby Came For JoJo Siwa In A Song, So Now Everyone’s Dragging DaBaby